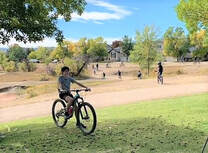 
In the past year, the youth of the TrailMark community created a makeshift "bike park" near the playground area. The HOA Board was made aware of the heavy use of the area by the kids, and at the time (Spring of 2021), we all thought that a formal "Bike Park," which the kids could use, was a great idea. The Board also decided not to contact SSPR about this use of their land until we were clearer on how to proceed, to properly explore the idea.

However, in the past months or so, additional bike jumps and modifications—such as parents hauling dirt into the community and building large jumps and obstacles—have posed a new challenge to the community and to SSPR, who as a general policy, consider that any non-professionally designed use of the land cannot continue because of liability and safety considerations.

Of course, safety is always at the forefront of decisions that involve the community.

The HOA Board did not complain to SSPR; however some residents did complain to SSPR about safety concerns and the improper use of the land. There were, in fact, some injuries sustained by the kids, of which the HOA Board in general was not informed of in a timely manner.

The HOA Board asked for an immediate on-site meeting to discuss what might be the possibilities for an SSPR sanctioned "bike park." The Board also told SSPR that they were supportive of a formal "bike park" if the SSPR could establish one.

On Tuesday, October 5th, 2021, your HOA Board met with the head of Parks and Recreation for SSPR to evaluate the current status of the makeshift "bike park."

The TrailMark Board was told, at this exploratory meeting with SSPR's Dave Brueggeman, that SSPR would absolutely NOT be designing and building a "Bike Park" in the future and that they would have to level the jumps, for safety reasons, fence off the area and replant the damaged areas to restore those areas for their originally intended use.

In spite of the Board's questions, Dave made it clear that the jumps and obstacles pose a high safety risk, and SSPR cannot allow an alternate for the land's originally intended use. Dave also explained to the Board that the position of the SSPR would be firm and that they could level the jumps in the coming weeks and post some temporary signs, until they could formally revegetate the land in March, 2022.

Dave Brueggeman said that he welcomed any callers with questions, comments or concerns regarding this issue, and to contact him at South Suburban Parks and Recreation at 303-953-7628, or by email to daveb@ssprd.org.

Subsequently, SSPR—from the top—totally reversed its previous ABSOLUTE position (which the Board shared with the Residents) that they would never contemplate a "Bike Park" at that location. A community meeting was scheduled with the TrailMark Residents for questions, considerations and explanations. As usual, safety was first and foremost for SSPR.

Thanks for your understanding.